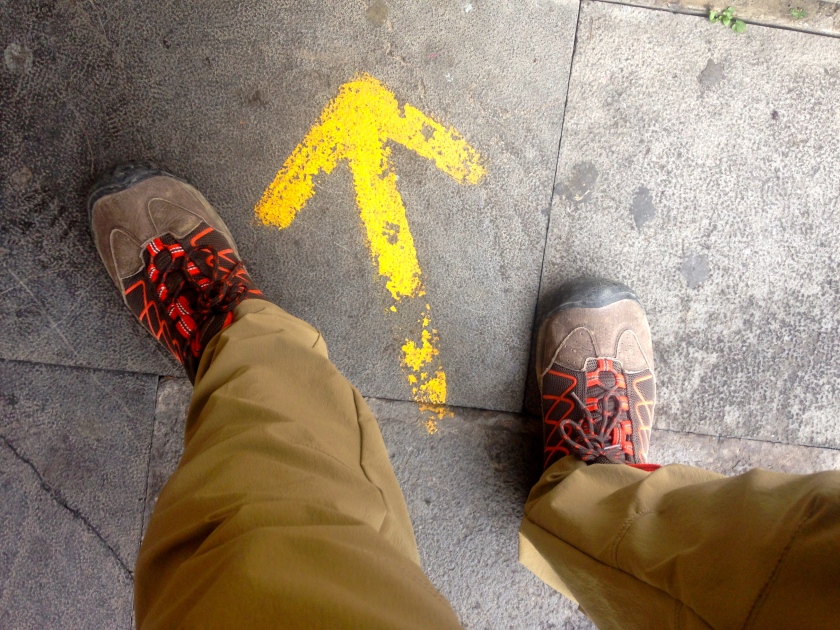 “I lost almost everything,” says the man, “and now I’ve got nothing”.
His friend says, “We could make something out of that”.

Let me tell you a story about stories and the power they have to drive our lives.

Whenever we start thinking we have nothing, we’ve stepped through a blind spot into a trap. The blind stop is real. The trap is an illusion, wrapped in a lie. But we don’t see that. Instead of freeing ourselves and moving along, we stand there dazed, wondering what happened. Then we start making up stories. “It’s my own fault,” we say. “I should have seen it coming.” Our own words make the trap real. The stories we tell strengthen the lie. This is not a parable. It happens.

I once heard a friend say, “I have nothing, because I am nothing.” I was staggered by the number of illusions that remark emerged from. But it had become so embedded in the story he’d been telling himself  that it had become his truth. It took a new story to untangle him from that.

This same friend is now a believer in abundance. When I ask him how that happened, he says, “Do you know that story about the loaves and fishes?” I tell him that I do. “Well, that’s my story now.” I encourage him to say more. “Do you know what God’s favorite building material is,” he asks? I tell him that I don’t. “God’s favorite building material is nothing. He loves to make something out of that.” I’m not sure what to say.

And so you’re a believer now, I ask? He smiles and says, “All I know is that ever since I started living in that story, I’ve come to see myself as someone who’s been given a basket full of good stuff to pass around. There’s always more than enough. I give that away. Then more comes.”

I was thinking about that story today. There are five thousand people gathered. The disciples are worried. How are we going to feed them, they ask? Jesus says, “What have you got there?” They shrug. “Five fish. A couple loaves of bread.” What they mean is we’ve got nothing. They’re about to tell themselves a story about that nothing when Jesus says, “I’ll take care of that.” Then he changes the whole story. All at once, there’s not only enough for everyone. There’s extra.

Yes, it’s a miracle, and you can believe what you want about that. Instead, focus on my friend. By trading the story about nothingness he’d created for himself with this story about abundance, he changed his life. Well, it wasn’t quite that simple, but at the very least, that new story became a tool that helped free him. He now lives in a story about abundance, and works in the business of giving. He doesn’t just give material goods to those in need. He helps them create new stories to live in. He gave me this story, and now I’ll give you mine.

A year ago, I was living in a story about nothing. “I’ve got two stents in my heart, no job, and no real prospects,” I’d tell myself and anyone who’d listen. “I’m trapped.” Then, I woke up one morning and began working on a new one. “I’m going to walk the Camino de Santiago,” I said, and then step by step I walked into that story.

For a while along the way I way still telling people about the stents and my problems. Then one day, I stopped doing that. That story no longer served me at all. Now I tell people, “I’m a pilgrim who walked the Camino, and I’m writing a book.” I still have the stents. I’m still unemployed. But I’ve stepped into a new story, and I’m living that now.

And what does this have to do with me, you ask? Well you could do that, too. New beginnings grow out of new stories. If you’re trapped in a story that’s no longer serving you, start working on a new one. If you know someone trapped in a story that’s not working and you’ve got one that is, share yours.  That’s all I’m doing. We live out the stories we tell. Make yours a good one.

Let The Grace You Need Come

Break the Cycle: Start with Joy.

Step Into A New Story

The Arrival Of Unexpected Joy

Specialize In The Impossible

Some Principles of Pilgrimage

The Book of Begin is a pilgrimage through the days. Some days it will all come together. Other days it wont. We expect this. We’re heading for the mountaintops, but we’re ready for the valleys. We know there will be plateaus, so we're prepared for the long slogs. Though we long to walk in the light, we're not afraid of the shadowy dark. We embrace it all. That’s the pilgrim life. Along the way we'll do what we can to make things better. When we get stuck, we'll get unstuck. We know that there's always a shift, always a new focus, always some move we can make that opens up Way just when it seems most blocked. We also know this: Every day is a new beginning and blessings are always on the way. Buen Camino.